Here, something that is very close to what I think, but put in better words by smarter people:http://www.medson.net/A432hz-myth.html


"The intention carried by a music is more influential than the pitch to which it is tuned. The choice of scales - and therefore the resulting intervals - are also fundamental in my understanding. There are several. There are 15,000 scales in Indian music."
"Stating that 432 Hz corresponds to the proportions of the Cheops pyramid, Maya temples, the speed of light, the frequency of the water, the frequency of the human heart or the Precession of the equinoxes is therefore pure fantasy and I classify these statements as fragile and partisan."
http://www.miltonline.com/2014/01/07/hertz-so-good/


"Play any higher tone followed by a slightly lower one and you can convince yourself and others that the second is more relaxed and resolved, and less ‘harsh’. This is simply a trick of associating negative connotations to higher pitches and positive ones to lower pitches. A higher pitch could be described as harsh, cerebral, brash, brittle and sterile (as opposed to soft, spiritual, peaceful, relaxed and warm) or strong, thoughtful, brave, optimistic and bright (as opposed to weak, thoughtless, cowardly, pessimistic and dull). Our expectations do the rest. If you value anecdotes, then consider this: I’ve discussed the 440Hz/432Hz issue and played the two tones to an audience, almost all agree that the latter sounds more ‘relaxed’ and ‘peaceful’. However it’s then revealed that what was actually heard was 432Hz followed by a 424.15Hz tone (a drop in pitch proportional to 440Hz-432Hz)."
One more article by AskAudio:
"Fiction: Mozart used 432 Hz for all of his music.

Fact: The only evidence for Mozart’s A comes from an ancient tuning fork from 1780 with the tone of A=421.6 Hz. This tuning fork belonged to the Viennese piano builder Johann Andreas Stein, the leading piano maker in Vienna at the time, who was responsible for Mozart's pianos as well as Haydn’s and Beethoven’s. It is likely that they have all used A=421.6Hz."https://ask.audio/articles/music-theory-432-hz-tuning-separating-fact-from-fiction

I proudly present "Silver Glockenspiel", a Kontakt based instrument on which I was collaborating with MA-Simon.
The Glockenspiel has been carefully sampled both with mallets and a violin bow.
It was recorded in an acoustically treated room using two AKG Precision microphones.

Within this library you will find Solo and Section Patches.
The Instrument has been sampled cromatically from C3-C5. But the patch has an extended range to G2-C5 for the Mallets and to G2-E5 for the Bowings.

The volume of the Bowed Instruments is controlled with the modwheel.
There are looped and unlooped patches so you can either play the original recorded bowings ore the more smooth and looped ones for more fluid playing. 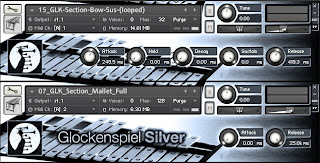 The instrument is for sale at sampleism.com for £4.99 (approximately $8 or €6) which is a steal for this library.
Posted by Mihai Sorohan at 13:56 No comments:

Email ThisBlogThis!Share to TwitterShare to FacebookShare to Pinterest
Labels: samples

A more correct title would be "The modern Western music approach on the transposed version of what we think was the Greek system, based on work of a number of medieval musical theorists"... but that would be way too long.

Most modern, popular, western music has been largely based on the major and minor scales. Before this, most music was based on the seven traditional modes established by the Greeks.
I made a list because I couldn't find a good quality one on internet, good enough for printing, so here you have it: 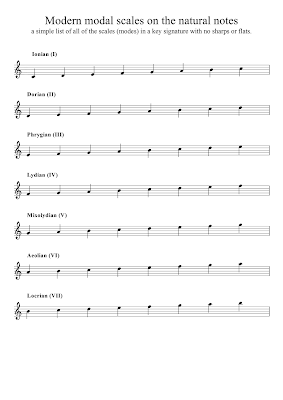 The subject is widely covered here (links to articles):

Posted by Mihai Sorohan at 02:05 No comments: 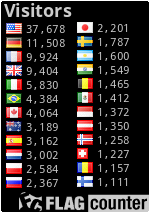